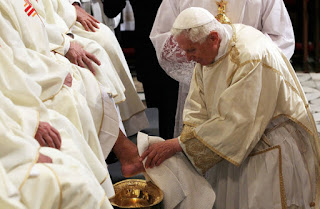 Subjecti invicem in timore Christi.
Being subject one to another, in the fear of Christ.
Paul opens up this passage with a command that gets lost in the shuffle of modern political readings of scripture. Focus on the command not on the elucidation. Serving… being subject to one another. How does that seem to us today?
Evidently, when two powerful males are introduced, the games of power mean that whoever extends their hands first means they are being subservient. Also evidently if you let someone go ahead of you on the Highway, you are indicating that you know you are blocking traffic. I’ve read (on twitter) that letting a woman enter a door before me is actually a sign that I am in control: I’m not being polite or subject to the other party.
Silly psycho-political games we play.
And yet, Jesus does say that whoever would lead… must be the servant of all. To use our broken ideas of Psychology, then… while Pope Benedict (above) washes the feet of folks on Maundy Thursday… Pope Francis must be making quite the power play by washing the feet of prisoners: 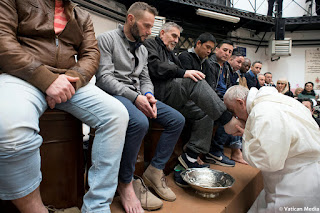 Or, perhaps, humility is a thing in itself and we should not let modern political babble confuse us.
We are to be servants of each other.  We are to be subject one to another.
This can be harder than it sounds. Social norms are as hard to navigate as white water rafting at night. Trying to figure out who’s in a room is enough for me: placing myself at the service of the least in the room requires figuring out who they are. I blurt out questions when it’s not my turn, don’t know when to jump into a conversation, can’t remember names to save my life, and (to be honest) struggle with other psychological issues that are not commonly acknowledged outside of certain Church documents but arise from the sins with which I struggle. So it’s a safe thing for me to just say to everyone in line, “you go first”.
Our culture, on the other hand, wants everything to be “fair” by which they mean mostly “as long as I get mine…” Why should I come early and stay late? Others will do that. Why shouldn’t I get promoted at work before others? Why would that poor slob win the lottery when I need it more?
I remember reading a story of a pair of Orthodox nuns visiting a parish. You’ll need to know that in many modern Orthodox places monastics can be viewed with suspicion. This can be helped by some anti-monastic bishops… anyway… these two nuns were visiting a parish and were at coffee hour socializing with everyone else and suddenly a woman pointed at them eating and having a good time and said, “See, they are hypocrites. They come here to ask for charity, but then they take our food like a member of the parish and just laugh.” One nun stood up and and was offended. The other prostrated herself at the feet of her accuser and asked forgiveness.
The second nun was subjecti invicem in timore Christi.
I love the stories of the Christian Martyrs whose faith was discovered because they were visiting Christians already in prison to bring them food or messages from home. When Christians actually do “Pro Invicem” we get in trouble. Christians get arrested for feeding the homeless, for sheltering Jews, for ignoring unjust laws, for hiding slaves, for helping refugees. We’ve been getting in trouble for this since Paul was hiding escaped slaves, emotionally bullying their masters into manumission and using the Church to subvert cultural paradigms all over the empire. As government and societies today are trying to force us back into slavery to pagan ideals of nationalism, immorality, and racism, I hope we stand firm.
But I hope we do so by subversion, by pro invicem… we must remember to love our enemies… because we don’t have any. Literally every political thing in the world is here to distract us from God, and it is supposed to look like “our enemies” are doing it  – so we blame the other humans – but we forget the only enemies we have are demons? Literally every political or “social justice” thing is a false flag op.
That person over there is not a demon, is a living icon of God. They may be wrong… they may need to be opposed or voted out of office or imprisoned for crimes, but they are also to be served by us. By serving them we will win them for Christ. We will win the world that way.