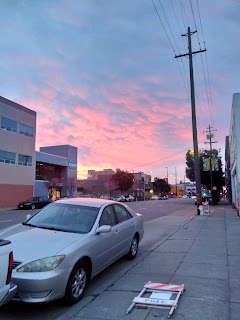 We have a huge homeless problem in San Francisco.
The problem is that we tend to trust gov’t blindly without calling it to account for failure.
If we manage to elect persons of all colors, genders, and sexual orientations we feel good about ourselves – even though they are as unjust to the poor as anyone else.
If we manage to elect only one party (we really only have one party in SF) we feel good about ourselves – even if they are just as beholden to big corporations, property developers, and the wealthy as the party we don’t have.
If we manage to elect people who actually try to do something we pass ballot measures that undo their good works.

We have a huge homeless problem in San Francisco.
The problem is we ask too many questions.
How did he get that way?
Did he do drugs?
Is she abusing the system?
If I give her money will she just buy drugs?
Is that even any of my business?
If I give money to that organization how much of it goes for wages?
Won’t the gov’t support them so  that if I give them money, it’s  just double.

We have a huge homeless problem in San Francisco.
The problem is that we nullify any moral teaching that might make us feel obligated.
We are obligated to charity in Judaism, Christianity, Islam, Buddhism, Sikhism, Hindusm, and several others. We prefer instead an odd combo of Prosperity Gospel and Newage, Neognostic Victim Blaming that allows us to imagine no deity will hold us responsible as long as we feel good about things.
This coupled with an entitled NIMBYism means that no one is obligated to care if they don’t feel like it and those that do care can be called to the carpet for making the rest of us feel guilty.

And in the end, we will find ourselves beyond Abraham’s bosom on the wrong side of the great abyss. The Fathers are not kind here:

AMBROSE; From this we learn then, that we are not ourselves the masters, but rather the stewards of the property of others.
THEOPHYLACT. Next, that when we exercise not the management of our wealth according to our Lord’s pleasure, but abuse our trust to our own pleasures, we are guilty stewards.
CYRIL. This discourse concerning the rich man and Lazarus was written after the manner of a comparison in a parable, to declare that they who abound in earthly riches, unless they will relieve the necessities of the poor, shall meet with a heavy condemnation.
AMBROSE. But the insolence and pride of the wealthy is manifested afterwards by the clearest tokens, for it follows, and no one gave to him. For so unmindful are they of the condition of mankind, that as if placed above nature they derive from the wretchedness of the poor an incitement to their own pleasure, they laugh at the destitute, they mock the needy, and rob those whom they ought to pity.
AUGUSTINE. For the covetousness of the rich is insatiable, it neither fears God nor regards man, spares not a father, keeps not its fealty to a friend, oppresses the widow, attacks the property of a ward.
Pope GREGORY. Moreover the poor man saw the rich as he went forth surrounded by flatterers, while he himself lay in sickness and want, visited by no one. For that no one came to visit him, the dogs witness, who fearlessly licked his sores, for it follows, moreover the dogs came and licked his sores. By one thing Almighty God displayed two judgments. He permitted Lazarus to lie before the rich man’s gate, both that the wicked rich man might increase the vengeance of his condemnation, and the poor man by his trials enhance his reward; the one saw daily him on whom he should show mercy, the other that for which he might be approved.
CHRYSOSTOM. He died then indeed in body, but his soul was dead before. For he did none of the works of the soul. All that warmth which issues from the love of our neighbor had fled, and he was more dead than his body. But not because he was rich was he tormented, but because he was not merciful.
Pope GREGORY. We may gather from this, with what torments he will be punished who robs another, if he is smitten with the condemnation to hell, who does not distribute what is his own.

In San Francisco, each one of us has the nearly unique opportunity to be Dives to our own private Lazarus. I think, though, most of us would rather banquet in linen and purple robes. We’re doomed.