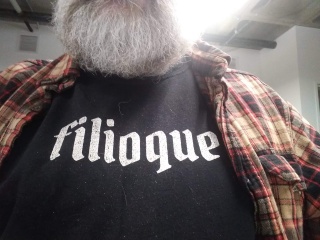 (Who proceeds from the Father…) I will send him to you.

I’m not going to defend the Filioque clause with this essay except by accident. I’m continually asked why I left Orthodoxy for Catholicism traveling from east to west, so I thought I should finally answer clearly online. I’ve done so in private conversations, but I’ll try to lay it out here.

As has been documented in many places, I left the Episcopal Church because the threads of orthodox, traditional Christianity that I found there were entirely optional. That they were becoming fewer and further between was a sign that I needed to leave. Staying where I could pick and choose doctrine was a sign that I wasn’t under Authority so much as I was in a religious shopping center. It’s important to say that at the top of this essay.

When I left the Episcopal Church, I had it in my mind that Orthodoxy and Catholicism were the only places I could go but the Roman Church was, in 2002, going through the “Boston” sex scandal which was turning into a much wider issue. There were prochoice Nuns arguing for women’s ordination, there were clown masses, and there were Catholic politicians who couldn’t tell doctrine from dog poop.  Having been in the Episcopal Church where all of that had led directly (in less than 20 years) to the “Thing I was Leaving” I didn’t want to do it again. Rome was not going to work for me. So I became Orthodox.

If you’ve followed my blog at all you know everything that happened there, from my crazy convert phase to my ultraliberal “indy” phase. You know I went to a monastery at the end, meeting there the Western Rite Orthodox community of Denver and the surrounding area as well as from other parts of the country. When you’re in a monastery (I was only there for 6 months) you suddenly discover you’re plugged into all the gossip in the church. You hear literally everything going on, even in the furthers corners of the ecclesiosphere.

At the monastery during a long talk with my brother, Nicholas, I wrestled with the idea of being a monastic who lived at 7500 feet above sea level, who never had to “serve” anyone unless they drove 3 hours out from Denver to ask for my help. Nicholas said to me, “You want to be a friar. Orthodoxy doesn’t have friar.” Discernment continues…

What I discovered between 2002 and 2016 was that everything I had run away from in Rome was also present in Orthodoxy: financial scandals (primates who rack up credit card debt, monasteries that get re-possessed, chancellors who steal money, parishes & missions that go into debt because they build for 500 when they have 4 families), political infighting (the OCA and ROCOR basically exist because two wealthy Russian families had a fight in the midwest in the 1920s, currently the Greeks and the Russians are out of communion with each other, and don’t ask how many Bishops engage in simony), and sex scandals (from Bishops molesting women and diddling seminarians to having relationships with clergy, monastics raping each other). There are liturgical messes (between the modernizations of the GOA and the AOCANA, altar girls, and other shenanigans) and high-placed liberals (with all the same sexual and moral collapse that we have come to expect in the west, and politicians who flaunt their faith for votes even as they totally ignore the teachings of the same, and clergy who get all swept up in the awe of knowing senators or mayors). The a la carte nature of the Church is just the same as well: Orthodoxy in America, like the Roman Church, is filled with “conservatives” who get hung up on moral conformity, as long as they can keep their wallets and political choices out of the arena. Vote against gay marriage and abortion, but vote to keep the minimum wage down and taxes low, and whatever you do keep the aliens outside the borders. Libertarian Orthodox are as annoying as Libertarian Catholics. The Racist Orthodox are as evil as Racist Catholics. The hideaway from evangelism Catholics are just as tiresome as the hideaway from evangelism Orthodox.

In short, the main difference between the two bodies was one of size: the media doesn’t care what the Orthodox churches do because they are tiny (at least in America). Not enough readers would care if there was a sex party at an Orthodox seminary. (Orthodox? What are they, Jewish?) For every one Orthodox parish I could reach I could find 20 or so Catholic Churches within spitting distance. I have to walk by three to get to St Dominic’s on Sunday.

There’s a huge mess right here, and an equally huge mess much further away, why waste all that gas?

Rome had the one advantage of insisting that both Orthodoxy and Catholicism are equally the Church, whilst Orthodoxy says she alone is that thing – although the way the Russians treat Catholic Clergy (and Laity) coming into Orthodoxy says rather a bit more.

Both lungs of the Church for all that they are filled with signs of age and too much smoking are also filled with life, pure air, and the circulating Blood of Christ. If I were in Russia, I’d still be Orthodox. Alexy II has expensive watches, political alliances with Putin, imperialist eyeballs on the Ukraine, and no shortage of Russian Neo-Nazis beating folks up with crosses made of 2x4s. But Orthodoxy is the Church there. There are sinners everywhere. I don’t want a pure church: I want the true one.

I’m here, in the West, where the Patriarch of Rome is in charge and all the same problems. I’ll stick with him. Sure, he insists that John 15:26 needs to be linked up with John 16:7. I’m ok with that.