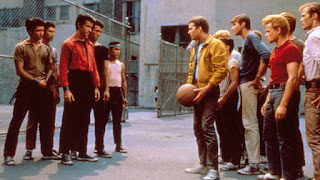 The Readings for Friday in the 14th Week, Tempus per Annum (C1):

Tradet autem frater fratrem in mortem, et pater filium: et insurgent filii in parentes, et morte eos afficient: et eritis odio omnibus propter nomen meum: qui autem perseveraverit usque in finem, hic salvus erit.
Brother will hand over brother to death, and the father his child; children will rise up against parents and have them put to death. You will be hated by all because of my name, but whoever endures to the end will be saved.
Again with the brother against brother and in the New Testament, now. Apart from the Sons of Zebedee and Andrew and Peter, there are very few brothers that get along in the Bible. The Macabbees, I guess. Everyone else seems to have a bit of an issue with internecine incivility.
This passage, though, is about the Church. Brother will hand over brother to death: Christians will be acting like the sons of Jacob, as the sons of Adam and Daughters of Eve that we are. Although it can seem a bit conspiratorial at times, this is actually one thing I fear. I know why I fear this: because I was often on the other side.

Yes, I’m a Christain, but not like one of those over there…

My great fear was that someone would think I was a Christian like the ones the someone hated – whoever they were. In that us-and-them mindset, trying to be really cool (not like them) I was bound to sell Christians short in order to look good to my friends. It actually doesn’t matter who the “us” was in this story. It’s only important that I be seen to be not one of them.

Who was one of them?

Repeatedly I’ve had driven home to me lately that, as far as human beings are concerned, there is no “other”. There is only us. There are still two sides, but they are not the sides we think of.

In Gulag Archipelago, Alexander Solzhenitsyn said, “The line separating good and evil passes not through states, nor between classes, nor between political parties either — but right through every human heart — and through all human hearts.” In short, we are “The Others” we’re afraid of. Even that fails to describe the real situation: God made us. We belong to him. We are his people and the sheep of his pasture. God made all of us. Even the folks that say they don’t or won’t belong, even the folks that feel left outside, even the folks who hate all conception of God, Church, Good, Chastity, Love… whatever. God made us all and we belong to him.

There are folks who struggle to stay on one side of that line. There are folks who struggle to stay on the other. Very few people want to reject love, peace, goodness. And everyone usually acts out of love of something. And all love… is of God. You have to love something and to the extent that you love – even broken – you are being Godly. Certainly, because we are humans, our love can be broken. Most of us have broken love. If you’re walking around, in fact, it’s broken.

There are those beings who would have us love stuff and use people (instead of the reverse). God’s image is not in stuff: but it is in all people. When we fail to love people when we love stuff (pepperoni pizza, cheap radios from WalMart, political ideologies, national anthems) we are at risk of devaluing the image of God present in each person – and so of devaluing God himself.

There is only one force that drives us to devalue persons created in God’s image. It matters not if we do that by our shopping, our voting, our eating, or our dishonesty. When we do it, we’re fighting for the other side.

Today’s Gospel reminds me that there are those (and I have been one) in the Church who fight for the other side. We don’t even do it covertly. We become convinced that those over there are so wrong as to not even be one of us. They are the Sharks. Or the Jets. They are not one of us humans, you see?

In all honesty, they may fail at being Catholics. They may fail at being Christians. (Who of us does not fail?) But they are always one of us: one of the bearers of God’s image. We fail in this, become the other side when we forget another Solzhenitsyn quote (perhaps the rest of the one I’ve cited): “Even within hearts overwhelmed by evil, one small bridgehead of good is retained.”

The Saints and Fathers teach us over and over again that we are to mourn and pray for those around us led away into fighting against Truth. As we are to mourn each our own sins, when we see someone who does not know their sin, or who is aggressively opposing the truth, we should assume two things: if they knew the real truth of Love, they would not oppose it; and, it is us who have failed to tell them or show them. Corrie Ten Boom found herself standing in Ravensbrück Concentration Camp watching Nazi soldiers beat another prisoner. She found it a perfect opportunity to share the Gospel of God’s love with the inmate standing next to her. I’m afraid to do this on the bus – sometimes I’m afraid of the person next to me at Mass or at work! Over and over Corrie saw God’s presence in the person next to her, and she reached out in Love. It’s amazing how many times the response even from Nazis, was Love given back.

We should, therefore, pray all the more for them and mourn, all the more, for our lack of love in showing the way more clearly.

And we should remember that the only “them” is the Demons who seek to divide us. Even if someone is leading us to the chopping block, the executioner, the press, the social media, or the courts for our faith, it should be assumed that it is a failure of love leading to this, not a failure of the person. Jesus says we will be persecuted because of his name. If you find this love difficult – and who would not? – begin perhaps by Thanking God for using this person to show you the fulfillment of prophecy. Then pray for them – and you – to be wrapped in Love.