In the night watch just before dawn the LORD cast through the column of the fiery cloud upon the Egyptian force a glance that threw it into a panic.

If you read Gone with the Wind you get a very different image of Scarlet O’Hara than you do if you watch the movie. The movie skipped bits of the book – which was the best selling book in America at the time – for the sake of brevity. And, because some narrative was edited out, bits of the on-screen story had to be changed. Did you know Scarlet had a son by her first husband before he died early in the war? Anyway: these things did not change the meaning of the movie for the audience at the time because they had all read the book. Moviemakers could make assumptions based on the knowledge of their audience.

I had this reading at the Easter Vigil and I was confused by this verse. Here it is again… so time to look into these word choices.
…Cast upon the Egyptian Force a glance… it sounds like a “dirty look”, or a sort of curse. And what’s with the very off-putting turn of phrase, cast on them a glance that threw? There are no passive verbs in the Hebrew, Greek, or Latin versions of this verse, nor in any English translation.
The Hebrew, Greek, and Latin versions of this text, along with all the English ones based on them, have the Lord looking out and doing something.

The NABRE has the Lord looking out and then – through a really painful grammatical construction – has the Egyptians doing something in reaction to the look.

Are the translators trying to Save God’s Reputation? Well, probably not. Evidently, one bias in the modern Roman Catholic world is to eliminate “troubling” passages. In the ancient languages, this verse says God kills the Egyptians. That could, you know, raise questions. We’d end up discussing the book of Job.

Better to dodge that bullet by saying the Egyptians panic of their own free will which accidentally implies that they could see God looking at them. 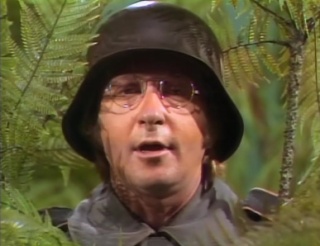 Skipping passages that may raise questions is not limited to the Catholic Church. In the Orthodox Churches, where the daily offices of Matins and Vespers are often pared down to 30-45 mins of time (instead of the full celebration of same which could take – literally – hours) it’s up to the Choirmaster to pick which parts to skip. This results in some interesting choices depending on the biases involved. At a Monastery it’s the Father Superior who has that final say, and there, too, interesting choices are made.

The thing about liturgical editing of texts into a lectionary or an evening service is that it should assume literacy and familiarity on the part of the singers, readers, and congregation. All of us should know what was skipped for the sake of brevity or complexity. We should not be confused by the difference between the movie and the book

The real issue is that we do not know what we’re missing.

So when a Greek Parish compresses the entire 45 minute recitation (hour-plus if singing it properly) of the Matins Canon into 5-8 minutes, the Congregation begins to think that’s normal: it’s only the other, strange parishes that make up stuff to extend this. When the Liturgy of the Hours says here is the text for the Psalm, who notices any more when it skips a few verses? Do even the clergy who have to recite it know? When a church that uses the Common Lectionary has someone say, “That’s not in the Bible!” Is it because they never bothered to learn, or because someone hid it from them?