There are some seriously beautiful Churches in this Catholic city. Some 25% of the population in the Bay is said to be Roman Catholic. That means there are more Catholics in this Bay Area than there are Episcopalians. Anywhere. Or Orthodox, for that matter. (How many of them go to Church is another thing entirely, as it is for the other groups.) That many folks means there are some Beautiful Churches here. There are some toasters as well, don’t get me wrong, as well as some of those cyborg things that use holograms and floating statuary. Still, this one seems the winner.

Built in the late 1920s, just before the Depression hit, just in time to support folks through that dark period, and refurbished and retrofitted in the 1980s, just in time to withstand the Loma Prieta quake, it’s a miracle of community in the heart of this city. Doubly so, for the initial funding was from the community and it thrived through the Depression; and then, again, in the 80s, when the Archdiocese wanted it closed, the OP said not just no, but, O Heck No. And the community made the rebuild, and the retrofit and the rebirth happen. I don’t know if this is true, but I’ve heard that nearly 20% of the new Catholics in the Archdiocese come through this RCIA program. There are program events every night, there are multiple masses every day, the Daily Office is said here, weddings, funerals, baptisms, confessions, the food pantry, the homeless services, and open doors from 6AM to (at least) 9PM ever day. The friary hosts the Novitiate for the Dominican Province of the Holy Name. Speakers and clergy come from all over the world to talk about missions, spiritual topics, social justice, and to pray in what was once called, “The most beautiful Church in America”. It still is in my book. 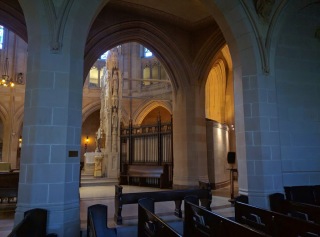 More than a Parish Church, this is home to so many folks, including yours truly. While I’ve felt at home before in other places, and even not at home at all, something here clicked in a way that no other place has. The homeless in the pews, the hippies with their patchouli, the couples, the ethnic diversity, the Spanish Passion Play, the Christmas Messiah Concert, the Old Ladies with their Rosaries, the faithful in the fellowships, the dozens of small groups that spontaneously form to care for each other, the mobs of folks that show up for the daily masses (I’m used to seeing 7 or 9 for a weekday service, not 60 or 70… 30 or more is normal at 6:30 AM) all combine to tell me the Holy Spirit is doing something here, in the Heart of the City, that is making all heaven rejoice. 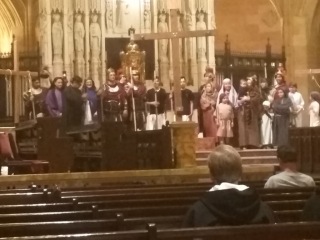 Numbers are not everything. Growth is not the measure of the Holy and I would rather a tiny, faithful remnant than a stadium full of pretenders. But we’re all sinners, and I can’t tell anyone’s pretending when I’m kneeling in the confessional or reaching out to receive the Body of Christ.

Deacon Jimmy asked in his Homily today how it was that each of us came to be there. I had heard of St Dominic’s parish, of all places, from my Orthodox Goddaughter and her husband, he a cradle Catholic from this Parish. When I left the Monastery, my heart firmly fixed on staying in the West, and having arrived back in SF, my question was “Where can I continue the monastic practice of going to Daily Mass easily from my residence and then get to work?” Easily means one bus, and that was the case for me: the 22 Fillmore brought me every day from Potrero Hill to Saint Dominic’s for 630 Mass and Morning Prayer. You’d almost think God set it up or something. My apartment now is also one bus away, although I have three buses to pick from now, and four buses coming back! That’s how I got there. But what kept me coming back was three moments: talking with Fr Michael about becoming Catholic (when he convinced me that plugging into the community was the important thing); Fr Augustine Hilander racing me out of Morning Prayer one morning to intercept me at the door and invite me to chant the office with the others in Choir; and Michael O’Smith letting me co-lead a small faith group when I had been in the church less than 3 months and wasn’t even officially Roman Catholic. These are all community-related if you can’t tell.

And now there is a new community in the Dominican Tertiaries, or the Third Order, OP, or the Dominican Laity. (Today at Mass I heard us called the “Order of Preachers, Laity”.)  I’m discerning my way yet, but that seems to be my best fit into this place.

I got there on the Second Sunday of Advent 2016. My friend, Tim, says three days later I moved in. How could I not move into my home? If you pay any attention to my social media you know I cannot stop taking pictures of this place. I’ve seen it in every light and shade, and in as many different sorts of weather as we have here, including smog from wildfires.

I’ve watch stars overhead, seen an Iridium Flare from the front steps, hidden from the rain, and knelt as the evening sun blinded me to the elevated Host at Mass. But there is something else, something, pardon the wordplay, Catholic here. Mass is filled with Anglican Hymns. Our Solemn Mass (11:30s on Sunday) is an Anglo Catholic’s dream of vested choirs and smells and bells. Our low masses (6:30 and 8:00 AM and 5:30PM week-daily) are motions of high piety and prayer (rather than 15 minute Dine and Dashes) that lead folks to mini coffee-hours at the local bakeries or fellowship meals on the Fillmore. I run into people from this parish all over town. There are folks praying the Rosary and the Jesus Prayer here. There are Latin, English, and Spanish Masses. There’s a guitar mass and a Taize mass. There may be more… who knows what God will do here? But everything is here from my past. It’s as if God has prepared this place for an oddball on a journey home.
And, so it is, that God willing, one of these will be mine soon: 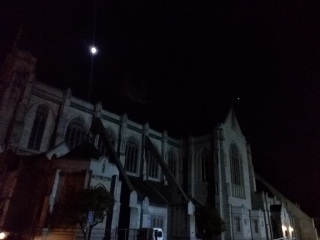