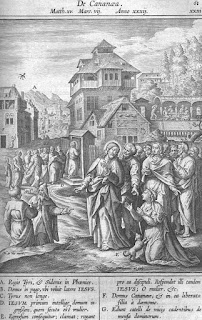 Non est bonum sumere panem filiorum, et mittere canibus.
It’s not good to take the children’s bread and throw it to the dogs.
Matthew 15:26b
I think everyone in the world today will be preaching something about what seems to be Jesus’ racism here.
It’s too easy to project our modern political hangups on this text. It’s also heretical.
So stop.
A better question to ask (than to accuse the God-Man of Racism, even pretended racism to make a point) is why did Matthew make her a Canaanite? There are no Canaanites in the New Testament. They are dead and gone by thousands of years.
Why did Matthew take Mark’s story about a Syrophoenician woman and make her a Canaanite?
It’s not racism – remember, there are no Canaanites. I could be making a joke about a Pict right now and no one would care.
Why did Matthew do it?
Cuz it’s funny.
Because in both Greek and Latin, Canaanite is a punch line to the reference about dogs: Canine, get it? Ha ha. This is such brilliant word play that it is inspired. Jesus made a Dad joke.
But we would rather accuse Jesus of racism. We – even the Biblically illiterate among us – would rather here become quite literal and say, look: that’s not God.
God’s got a better imagination and better writers than you.
We learn, I think, more about ourselves from this text than we do about Jesus. I agree with the Church Fathers that Jesus said no so as to make the woman say, in front of the disciples, I don’t care about your no, do it. Using women (and other members of the underclass) to teach the disciples a humiliating lesson was very much in keeping with Jesus’ style then and now.
Matthew’s Jewish listeners would have been slightly scandalized by Jesus talking to a Gentile. But Matthew wanted to make a point here so he didn’t just make her a Gentile, he made her a hated and feared bogey-Gentile from the far distant past: a Super Shikse. Are you afraid of Genghis Khan?
But when we cringe here, we do so because Jesus is hurting our sensibilities the same way he hurt Peter, James, and John’s.
And we just gotta grow up. (I’m speaking to myself here, mostly, because I am weak.)
For years I heard that I shouldn’t go to Church because of something called homophobia. But my very being cried out to go to Church. When I finally humbled myself and went, what I found was love. For years I was told I was being disrespected so I didn’t go. But when I humbled myself and went, what I found was love.
There are no Canaanites in the New Testament. There are no outcasts in Church. But there are humans in there. God too.
But someone might not like you if you show up. The Apostles standing behind Jesus might say “ew…”
So what? Until I walked in I hated and feared most of the people in there. Right now most people on the outside are filled with bigoted stereotypes of the people inside. So someone inside mightn’t like you? Tough luck for them. I don’t care about your no. Do it.
God is calling you. That voice you hear that says “I should go to Mass. I should go to confession. I should finally go to the Catholic Church. I need to get up earlier on Sundays.” All that is God speaking to you. And you’re going to let some human petty thinking keep you out? I don’t care about your no. Do it.
I don’t care about your modern political hangups. There are a lot of ways to inflict secular punishments on those we hate, on those who violate our social order, on those we deplore. There is only one way to save them. We gotta love everyone. I don’t care about your no. Do it.
There’s only one way out of this mess. And it has nothing to do with judgement, hate, bigotry, or revenge of any sort. Love.

Jesus is that love.

I don’t care about your no.