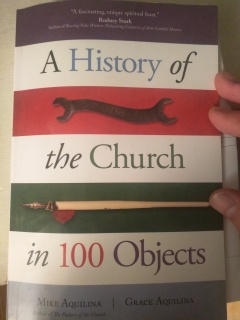 Popular histories can tend to be strident, combative affairs: they carry on arguments on and off their pages, and come with definitive points of view. People love them or hate them. They divide readers and reviewers into camps of good and evil based on reaction to the book. This is very different from scholarly history which is supposed to be “unbiased”.  If you didn’t like the history text in Western Civ I or American History (shoutouts to Dr Doug!) then you were not evil in the author’s eyes: you were only failing in class. Disagree, however, with Howard Zinn’s point of view in A People’s History of the United States and you, Dear Reader, are part of the problem, not the solution. It doesn’t matter if you read Zinn calmly and put it away having done your duty. The author is clear: he’s evangelising with his point of view and if you don’t agree you’re not just “another point of view”, you’re wrong.

A great bucking of this trend surfaced in 2010 when BBC Radio 4 and the British Museum did A History of the World in 100 Objects. This podcast (and radio show), coupled with a website, talked about all of history, while focusing on 100 things ranging from a mummy and a hand axe, to communist propaganda and solar powered products. This history was different on two points: it was not combative, and it was inclusive. Even when discussing something as potentially heated as a war with modern political applications, the British folks managed not to be name callers or to imply you were a dupe if you came to another conclusion. It was so popular that they made a book and a travelling roadshow of the 100 things. (I’ve never seen the BBC’s book, who needs a book when there’s a podcast and a website?) Still, as friendly as they were, they were also very skilled at unveiling history’s events: I found episode #67 on the Icon of the Triumph of Orthodoxy to be particularly troublesome for me because if its historical honesty. (That’s worth a whole post, maybe later.) Yet even with all these comments and a specific point of view, the Beeb kept saying, “You could have an entirely different history if you took a different 100 objects and read them differently.” And they invited listeners to participate by uploading photos of their own objects with their own histories. So, “Here’s history as we read it: but DIY.”

A History of the Church in 100 Objects, by Grace Aquilina and her father, Mike, falls into the middle. Clearly taking their cue from the BBC’s work (the cover of this book reminds me of the 2010 edition cover on the BBC book as I’ve seen it on Amazon’s website) they write their own history with their own 100 objects. At the same time they have a specific point of view and they are evangelizing.

Christianity is not a religion of mental acquiescence to a few points in a prayer. Christianity is a life of prayer, ascetic struggle, and stuff. St John of Damascus wrote that since God has become flesh, the very stuff of the world has become holy. We can venerate the wood of the Cross, or the image of Christ, or the flesh and bones of a holy dead person – or even of a living person – and know we are venerating the very stuff of God. This is the physical world God gave us, in which we are to work out our salvation. The history of the world is salvation history.

This book uses the stuff – ranging from the star of Bethlehem to the birth control pill – to talk about the history of the Christian Church. The authors clearly believe what they believe: the Catholic Church is the Church founded by Jesus Christ on the Rock of Peter. They are not telling only one possible story of a Christian community, they are telling the Story of the Church. If the reader is not Roman Catholic, however – as with Howard Zinn’s work – the reader will know they’re on the outside looking in. But Mike and Grace do it with such love and, pardon me, grace, that you’ll want to be on the inside, I think. They are evangelizing here.

The book pulls no punches with the bad parts of Church history. The struggle against an invading Islamic army is not covered up as politics in religion sauce. The divisions between the Church and various departing elements is not seen through warm and fuzzy ecumenical glasses. The Vatican’s history of Bad Popes is not glossed over. The presence of Apostate Catholics at anti-Catholic moments is very honestly discussed. Still, popular notions are challenged: the Crusades are presented as defence and there is no “religion of peace” in this book. Missionaries to the New World are presented as missionaries of truth liberating folks from a culture of death and blood sacrifice. The actions of capital and those who worship it either from the left or the right side of its altars taken against human beings is pointed out – and the struggle of the Church to align herself with the poor is highlighted. Popular revolutions of the 18th Century are not seen in a good light. The Second Vatican Council is seen in a positive light that has nothing to do with guitar masses and bad vernacular translations from the Latin.

The presentation is easy to digest. Each of the 100 objects is presented in 2-3 page chapters together with a full page image of the thing in question. Each object is discussed and analyzed and plugged into the over-all story. Unlike the BBC’s work there is no material analysis: the Geek in me would like to know who cut the wood for St Junipero’s cradle and from what tree. But that’s not important in this work: what is important is that one of the greatest missionaries of the world was raised up from that cradle to spread the Gospel in humility to my part of a darkened world. Each chapter ends with a couple of footnotes for more reading and the authors graciously invite more questions and offer themselves to answer them.

As a new Catholic, I felt plugged in by this book: my story is part of this story. My life is part of this life now and this book helped me to connect to people as different as Charlemagne (via his coronation stone) and an auto mechanic in Mexico (via his tools on his tomb). I can’t help but imagine that anyone, new or not to the Church, would be able to draw the same benefit. Like other popular histories, the reader may find himself on the outside of the authors’ point of view. But “you’re part of the problem” is not the attitude of the authors here. Quite the reverse, in fact. If you’re on the outside looking in, why not come in?

Perhaps someone on the outside would want to be drawn into that story which is why is this a dangerous book:

The loving presentation, the careful selection of objects, and the clear goal of evangelism make this a dangerous book. The table of contents alone will show that: the ramble from Bethlehem to the Jerusalem temple, from catacombs to Diocletian, from Helen to Charlemagne, from Homer to Ethiopia and beyond will expose you to the great Catholic claim that there is no secular history. All history is the Christian story. This is the physical world God gave us, in which we are to work out our salvation. The history of the world is salvation history. You’re in it, like it or not. You’ve no choice. Any history of stuff is part of God’s story.

The second reason this is dangerous: you may disagree with their point of view on the Aztecs and you may want to debate – that’s what they’re here for. They’ve drawn you in already. And if you read the chapter on the Aztecs (or Martin Luther or Margaret Sanger) and find yourself agreeing: why are you not Catholic? This book is dangerous because it is covert Evangelism for a History Geek. You can read this story and agree or disagree. But if you agree with the story (and how could you not?) then, you should be going to RCIA. God is using the very stuff of the world to draw you closer to him. That is solid Catholic teaching. Mike and Grace have presented a partial catalogue of how God’s doing that to one end: to get you, the reader, to come home.