The Readings for  the 5th Sunday of Easter (B2)
Among the Dominicans, The Feast of St Catherine of Siena

Ut credamus in nomine Filii ehe Catechism Tjus Jesu Christi : et diligamus alterutrum…
We should believe in the name of his Son Jesus Christ: and love one another…

Believe and Love. The words in Greek are  and πιστεύω pisteuo and ἀγαπάω agapao. To Trust in the name of Jesus and to Love, which, as Strong’s puts it, “to have a preference for, wish well to, regard the welfare of” another. The Catechism ❡1766 cites St Thomas who, in turn, is citing Aristotle: amare est velle alicui bonum. To love is to wish good to someone. In Italian today, one would use “ti voglio bene”, literally, “I will you good” to say “I love you” to anyone in a non-romantic, non-sexual way.

Trust in the Name of Jesus and will the good of others. That’s such an easy… such a hard thing to do.

But the Gospel gives us the meaning, the essence, if you will, behind these Johannine accidents.

Dixit Iesus: Ego sum vitis, vos palmites : qui manet in me, et ego in eo, hic fert fructum multum, quia sine me nihil potestis facere.
Jesus says: I am the vine: you the branches: he that abideth in me, and I in him, the same beareth much fruit: for without me you can do nothing.

We can do nothing at all without Jesus. In fact, agape – that divine sort of love – is Jesus loving in us and through us. We can’t do that at all. Our human nature won’t let us open up to that sort of self sacrifice, that sort of self-emptying. We want to put ourselves front and center. I love you. ME. This is me loving you. Love me back.

That’s not agape: that’s a new species of selfish.

I recently finished Corrie Ten Boome’s The Hiding Place and I’ve started on the sequel, Tramp for the Lord. Listening to Corrie struggle with loving is so educational. She knows she is supposed to love the Nazis, supposed to love the person beating her up, but she can’t. So she prays to Jesus to love through her. Suddenly she’s winning a soul for Christ, leading them to Salvation.

That’s love. Bringing another closer to Christ is the only good there is: if I open my heart to Christ, he can Love you through me. And if I do my job right, the person being loved won’t even see me, but only Christ.

When we draw near to the Sacrament, it’s not for something that we should ask. We should be there to unite ourselves to Christ. All the other things will fall into place if we are there to unite ourselves to Christ. And Love (which is God) will be the natural outgrowth of that action; disinterested, unselfish, agape.  The Eucharist, bearing the accidents of bread and wine, but the essence of Christ, make us into itself: bearing the accidents of our presence in the world, but in essence Christ himself. We are the Body of Christ… if we let our ego out of the way.

Trust in Jesus – like Corrie did – and let him Agape through you to win souls for his Kingdom. 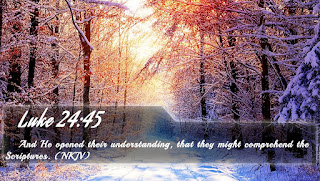 The Readings for Thursday in Easter Week (B2)

Tunc aperuit illis sensum ut intelligerent Scripturas
Then he opened their understanding, that they might understand the scriptures.

The first three classes of my (original) RCIA group, meeting in Columbus, GA, were spent addressing the Church’s teaching on the Bible. Since we were in the Bible Belt, talking about how Catholics talk about the Bible is crucial. We don’t think the thing fell down from heaven, highlighted passages in red and yellow, ready to go. And nearly every discussion in that class, no matter what the question was, usually ended up with the asker saying something like “But the Bible says…” and Fr Brian would have to bring them gently back to “but the Church says…” sometimes over a couple of discussions.

So today’s passage from St Luke – wherein Jesus has to enlighten the Apostles so that they understand the scriptures – might be especially troublesome to such a one, or to anyone who thinks they can divine the sense of Scripture just by reading it. There are other such passages after the Resurrection, such as yesterday’s reading when Jesus was at Emmaus. St Paul and Jesus rarely say anything in the first person singular. It is to the whole Church, to All Y’all, that the Spirit is given.

I attend a weekly meeting of a bunch of Catholics.  I’m not there every week, but I try to be. In fact I will go tonight! I hope it’s there tonight, but I may not be. Some Thursdays around holidays it gets a little hard to schedule. But anyway, there’s a member of the group who talks about Bible as if he were a Fundamentalist. From time to time we have a heated discussion where I’m happy to cite from my religious journey, but he is only willing to say “go read the Bible, that’s not in there…” A couple of weeks ago he wanted to quote “Vatican 2” to me, but that at least, I was ready for! (Thanks, Fr Brian!)

You really might like to read the document,  Dei Verbum (18 November 1965). But I’ve got the important passage below. I’ve added emphasis.

8. And so the apostolic preaching, which is expressed in a special way in the inspired books, was to be preserved by an unending succession of preachers until the end of time. Therefore the Apostles, handing on what they themselves had received, warn the faithful to hold fast to the traditions which they have learned either by word of mouth or by letter (see 2 Thess. 2:15), and to fight in defense of the faith handed on once and for all (see Jude 1:3) Now what was handed on by the Apostles includes everything which contributes toward the holiness of life and increase in faith of the peoples of God; and so the Church, in her teaching, life and worship, perpetuates and hands on to all generations all that she herself is, all that she believes.
This tradition which comes from the Apostles develop in the Church with the help of the Holy Spirit. For there is a growth in the understanding of the realities and the words which have been handed down. This happens through the contemplation and study made by believers, who treasure these things in their hearts (see Luke, 2:19, 51) through a penetrating understanding of the spiritual realities which they experience, and through the preaching of those who have received through Episcopal succession the sure gift of truth. For as the centuries succeed one another, the Church constantly moves forward toward the fullness of divine truth until the words of God reach their complete fulfillment in her.
The words of the holy fathers witness to the presence of this living tradition, whose wealth is poured into the practice and life of the believing and praying Church. Through the same tradition the Church’s full canon of the sacred books is known, and the sacred writings themselves are more profoundly understood and unceasingly made active in her; and thus God, who spoke of old, uninterruptedly converses with the bride of His beloved Son; and the Holy Spirit, through whom the living voice of the Gospel resounds in the Church, and through her, in the world, leads unto all truth those who believe and makes the word of Christ dwell abundantly in them (see Col. 3:16).
9. Hence there exists a close connection and communication between sacred tradition and Sacred Scripture. For both of them, flowing from the same divine wellspring, in a certain way merge into a unity and tend toward the same end. For Sacred Scripture is the word of God inasmuch as it is consigned to writing under the inspiration of the divine Spirit, while sacred tradition takes the word of God entrusted by Christ the Lord and the Holy Spirit to the Apostles, and hands it on to their successors in its full purity, so that led by the light of the Spirit of truth, they may in proclaiming it preserve this word of God faithfully, explain it, and make it more widely known. Consequently it is not from Sacred Scripture alone that the Church draws her certainty about everything which has been revealed. Therefore both sacred tradition and Sacred Scripture are to be accepted and venerated with the same sense of loyalty and reverence.
10. Sacred tradition and Sacred Scripture form one sacred deposit of the word of God, committed to the Church. Holding fast to this deposit the entire holy people united with their shepherds remain always steadfast in the teaching of the Apostles, in the common life, in the breaking of the bread and in prayers (see Acts 2, 42, Greek text), so that holding to, practicing and professing the heritage of the faith, it becomes on the part of the bishops and faithful a single common effort.
But the task of authentically interpreting the word of God, whether written or handed on,  has been entrusted exclusively to the living teaching office of the Church, whose authority is exercised in the name of Jesus Christ. This teaching office is not above the word of God, but serves it, teaching only what has been handed on, listening to it devoutly, guarding it scrupulously and explaining it faithfully in accord with a divine commission and with the help of the Holy Spirit, it draws from this one deposit of faith everything which it presents for belief as divinely revealed.

It is to this that I assented when I entered the Roman Catholic Church a year ago: I believe and profess all that the holy Catholic Church believes, teaches, and proclaims to be revealed by God. If this is not so, why would I bother? The idea that I can still make it up as I go along haunts me though. I’ve read the Bible. I know what that passage really means. I can do what I feel is right here. I’ve been doing things my way for so long (even in the Orthodox Church) that I want to do more of the same now. One Orthodox publisher asked me over pizza once why the Catholics didn’t buy his books. Well, because your stuff isn’t approved. But that didn’t dawn on him because most of the clergy he knew didn’t function that way.


Closing with one more passage from Dei Verbum: It is clear, therefore, that sacred tradition, Sacred Scripture and the teaching authority of the Church, in accord with God’s most wise design, are so linked and joined together that one cannot stand without the others, and that all together and each in its own way under the action of the one Holy Spirit contribute effectively to the salvation of souls.

One cannot stand without the others.

There needs to be a 12 Step Program for Sola Scripturas.