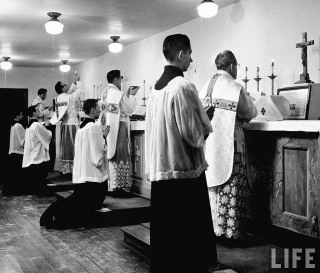 At RCIA we discussed sex and sexuality.  What an interesting thing, in the context of (Adult and Teen) confirmation class, to have an entire session devoted to sex. I say interesting because I think in 12 years I’ve heard the topic come up only a couple of times, and never as the main topic of teaching. It was certainly never touched on in adult classes. Archbishop Benjamin once mentioned marriage in a sermon that was on the topic of “we will never change our teaching” but without talking about what that teaching actually was.

Anyway: Father started with Does the Church say sex is good or bad? Uncomfortable laughing. No really, he asked again. Finally getting a few answers, he said that the Church teaches sex is holy, a Divine gift. From the beginning of the human story the first commandment is to participate in God’s bringing forth life. My brain wafted off on a meditation then. The issue is not sin or evil sex, then, but rather the constant essay at desacralizing sex. We just want it to be fun, useful, no more nor no less what we want it to be. It’s taking the leavened Lamb of the Byzantine Liturgy, after the anaphora, and slicing it up, serving it with butter, lemon curd, and tea.

Amusingly: there are those Christians who would do that to the communion bread. They also don’t think sex should be held that way either. This is the real issue. We live in a world that tries to define Sacred beyond its properly described boundaries. That is the only issue around sex.

But it is not the only place this same issue comes up.

I had a conversation once with my housemate in Astoria, NY. We were walking home from “the bars” at 4:30 or 5:00 AM on a Saturday. We were talking about a song that was running through my head from a TV show I’d seen once in childhood. I couldn’t remember the rest of the show – and he couldn’t place it from the fragment I had in my head (it’s in the video below). But I pointed out to him that it came up whenever something was “impossible” but I knew it wasn’t. I took it as a sign that things would be ok. He looked me square in the face and said,”There has to be something in your life that doesn’t mean something else.” In fact, there is nothing of the sort. Nor, until recently, did I know that this was the case for anyone. I just assumed that for most of us the issues was disagreeing about what things meant.  Evidently, for some folks sex (and other things) only mean the thing itself.

I have no idea how that could even be.

A presidential election always brings out the worst in my internet: partisanship, not the least.  There is also rancor, name-calling, anger, hatred, false witness, calling evil good, and murmuring. We can add in the rest of the list from Galatians 5, if we include the politicians themselves: “adultery, fornication, uncleanness, lasciviousness, idolatry, witchcraft, hatred, variance, emulations, wrath, strife, seditions, heresies, envyings, murders, drunkenness, revellings, and such like.” Against these, St Paul contrasts the “Fruit of the Spirit”: “love, joy, peace, longsuffering, gentleness, goodness, faith, meekness, temperance: against such there is no law.”  There is no law against these things, but they do put the Christian at variance with the general climate of the Election Cycle and, truth be told, in times past it was these very things that got Christians killed: they might not be illegal, but they can sure be annoying.  Have you ever tried to be the voice of reason in a barfight?

Christ says his Kingdom is “not of this World”.  We – especially in America or other parts of the “first world” – hear that to mean “My Kingdom does not have a physical mailing address on this planet.”  That is not only true of people who claim to follow Christ.  Nonbelievers of all sorts will cite that passage whenever Christians seem to get “too political”.  “Didn’t Jesus say his kingdom was ‘not of this world’? What are you doing in politics?”  Christians will use the same argument when talking to another Christian of the “wrong” political stripe:  “Why are you a member of thus-and-such political movement?  Jesus said, ‘Not of this world’!”  Finally there are those who – and I have counted myself in this camp from time to time – take “Not of this World” as a permission to stand “above it all” not wishing to be mixed up in all the partisanship, one gets all holy and stuff, standing aloof.  I’ve held that position pretty much since college.  I’ve never voted in a Presidential election and only three times have I voted locally.  My argument has been “yeah, this isn’t working, why bother?”  Consider this post the beginning of an examination of that POV.

Jesus’ phrase, as recorded in John in Greek, is:

Ἡ βασιλεία ἡ ἐμὴ οὐκ ἔστιν ἐκ τοῦ κόσμου τούτου.
To parse that out in word-for-word: “the kingdom the of-me not is from-among the cosmos this.” The important words seem to be “kingdom” βασιλεία, of course, and also “from-among” ἐκ and “cosmos” κόσμου. As Pilate realized in his reply to Jesus: Jesus used the word “Kingdom” βασιλεία, so, in fact, there is a Kingdom.  Jesus is claiming kingship of one sort or another.  But of what sort? The answer lies in that word, “cosmos” κόσμου.

Yes, Cosmos means “universe” or “this entire everything”.  But that is not it’s primary meaning.  We hear “Cosmos” today and we’re waiting for this:

In a very real sense, Dr Sagan’s version is useful:  Jesus’ Kingdom is not from-out-of this universe in these 100 Billion Galaxies of 100 Billion Stars.  But that’s not what Jesus means by “Cosmos”.  Such a thing “this physical world” is the 4th definition for the word, noted, in Strong’s as “very rarely so in Greek writings until after the age of the Ptolemies”.  Jesus seems to be using κόσμου in the primary sense of his culture: “Order”. As it was in Greek writings from Homer down, an apt and harmonious arrangement or constitution, (again, from Strong’s).  Jesus is saying “My Kingdom – very real it certainly is – has nothing at all in common with your conception of ‘Kingdom'”.

What that means is – secular issues aside – we cannot say “We have no obligation to this world”.  What we have is no obligation to this worldly system. (St Paul commands us to pray for those in authority: but we know that, over and over, our prayers for those in authority in ancient Rome were – rightly – deemed to be seditious.  As I said, these things might not be illegal, but they can sure be annoying. )

Point of fact, despite my previous political aloofness, I don’t think we have an obligation  – or even permission – to ignore all this.  However, I don’t think we have permission to get involved according to the rules of this κόσμου.  Our obligation  – the command given – is to follow the rules of our kingdom.  But, forgive me my past sins and errors, it seems clear that we should be involved.

In a future post, I will make a little essay towards the truth of what we should be doing.  In closing, for now, a meditation from 1980 on what sort of Kingdom this is.