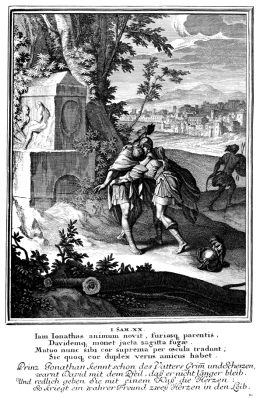 The Readings for Saturday, 2nd Week of Ordinary Time (B2):

When I was a kid it was popular to imagine that Advertisers were putting subliminal messages in advertisements, weaving elements of sex and death into magazine pictures using elements of what we would not call “photoshopping”. Rock bands were supposed to be weaving messages about drugs and devil worship into their songs, as well. All of these secrets could be revealed by someone who had discovered the keys.

In like manner, it is fashionable today to read into the ancient stories all of our modern vices. Politicians who don’t openly discount the Ancient Texts see St Paul’s tying of work to eating as an adjuration of welfare and charity, or the Sermon on the Mount becomes a guide to fiscal prosperity. his affliction hits all sides, as we are discovering modern political virtues in Jesus’ Egyptian Sojourn, or in the lack of available rooms in the inns of Bethlehem. (I actually have no problem with the Christian Virtues of care for the poor or the ‘Alien Among You’. I just don’t need to misread the Bible to do it.)

In few places is this tendency more obvious than in the area of sex. For we are quite clear that, despite all of the content of the tradition, whatever our modern sexual issue is, it is present in the Bible in a good light. So the story of King David and his foster brother Jonathan becomes one of same-sex attraction and romance. So common is this reading that it’s hard to find a modern image of these two men that doesn’t have them somewhat eroticised.

David and Jonathan become lovers in this reading, with all kinds of “proof” coming from various passages including today’s reading where David sees Jonathan as “above the love of women” which is a paean to the virtue of friendship or what moderns call “Platonic love”. But it is not so if you want to read sex into it. The reply is “how can you not?” And the answer is to note the illogic of the Hebrew writers encoding something so sinful into the lifeline of the great king, David. When David commits lust, adultery, and murder, God sends Nathan the prophet to call the King to repentance. Would not God do the same thing here? Unless, the argument goes, God was ok with this. But we know God’s not because it’s called an abomination, something beneath the level of human moral action. And so the circular logic keeps going.

We recently (12 January) celebrated the feast of St Aelred of Rievaulx c.1110-1167. He is another saint whose work is twisted by modern vices so that he is now considered the Patron Saint of the Episcopal Church’s gay advocacy group, Integrity. His work De spirituali amicitiâ (On Spiritual Friendship) – a handbook for Celibate Monastics – often gets quoted as advice for same sex relationships!

In the Gospel today Jesus’ Family think he’s gone mad. Here’s God healing the sick and setting the world afire and his cousins think he’s crazy. We also just celebrated the feast of St Anthony (17 January). The Gospel passage reminds me of a saying attributed this great Father: A time is coming when people will go mad and when they see someone who is not mad, they will attack him, saying, “You are mad, you are not like us”.

That seems to be where we are now. Women murder their children in utero, people mutilate their own bodies over mental distress, and our society assists them. People who refuse to assist them are called mad. People who refuse to read sex into everything are called unenlightened. People who strive for virtue (including chastity) are derided. All friendships are suspected of being sexual relationships. All communication is coded innuendo. There are puffs of photoshopped smoke in every icon and backward-masked sex plays in every Bible story.

It is as if, with our modern blinders of sex, we want to turn all of history into a coded case of Nudge Nudge, Wink Wink.

In this world, it is friendship that cannot be spoken of. No one believes in it anymore. Sex is everywhere: come play with me!

Yet, by God’s grace, may we all go divinely mad!

And draw our friends into Church.