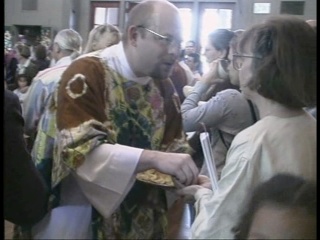 Yup. That’s me. You’re probably wondering how I ended up giving out communion in a tie-dyed vestment with no discernable liturgical color. That was me at St Gregory of Nyssa Episcopal Church, circa AD1999. The image is a still from a movie is called Dancing With God. I used to be able to find it online but not so much anymore. It’s not even in the Archive.
Setting aside, for a moment, serious doctrinal differences, that was the beginning of my deepest devotion to the Most Blessed Sacrament. Three things changed my devotional life as part of my ministry at that parish:
1) We gave communion by name to everyone. One day I walked up to my friend Lizzie, who was great with child, her first child. We all knew the child was a girl and we knew her name was Sophia. I walked up to Lizzie and the Holy Spirit wrapped himself around my voice as I said, “Lizzie and Sophia, the Body of Christ.”
2) I asked our pastor, Donald, what was I saying: was I saying something about the bread, or Lizzie and Sophia? He replied, “Yes.”
3) Since we used loaves of bread, there were often remainders which we consumed. We were also allowed to bring the Eucharist home. For several years I did daily communion as part of my morning devotions and had the Eucharist reserved in my room at all times.
Your toes perhaps are curling. Just put it down to a piety that’s neither Orthodox nor Roman Catholic. While neither Rome nor the Orthodox would agree, to me, as an Anglican, that was the Real Presence of Christ. Grace builds on nature – and where there is faith, God can work miracles anyway. And from that faith, I learned.
Although some traddies may be annoyed, part of my ministry is still Extraordinary Minister of Holy Communion. The moments alone with the Blessed Sacrament, alone in a church filled with hundreds of people, are the most special moments of Adoration imaginable. Standing unworthily, a sinner holds God in his hands. Infinity is contained between two palms, between two fingertips. The Master and Maker of All that is is silent, humble, luminous, flat, and still. A sweet scent rises from the Sacred Blood. Wind could move the Holy Body and he needs protecting with a covered hand or purificator.
The armies of angels stand in awe as a creature of dirt and slime can touch God. Demons scream and fall back in terror and a rage of jealousy, for they both crave and fear the love so freely given. And knowing sinfulness, knowing mercy through that touch, the sinner is saved, transported, welcomed into heaven. All of eternity, all of space, all of time is collapsed into the one moment of self-offering, as the Body of the Son is offered to the Father. This is our body. This is our blood. We become what we consume, we rise in his ascent.
There is such a mystery before us and yet we do not see it. We do not wish to recognize it. He, himself, body, blood, soul, and divinity, comes to us silently. Needing a human’s voice to say his name.
Asking only our assent.
Amen.