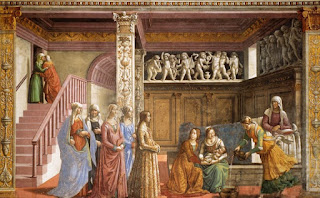 Omnia cooperantur in bonum.
All things work for the good.

This is one place where I feel woefully weak in my faith. For I need to have all my ducks in a row all the time. Yes, it’s true: I could up and move across the country tomorrow. But if I do it’s because I have all my ducks in a row and, “I got this.”  I know I usually make it look like “God, you gotta miracle? Cuz I need one…” but the reality is if I trusted God more, I might have actually stayed put and acted rather than running away.

In hindsight no one would be happy: but I might have stayed in Western North Carolina, when the Parish and the Monastery melted away… and become Roman Catholic just there. B16 had come on board, everything was looking rosy, Asheville was even doing parades with the Blessed Sacrament!

But I’ll take my ducks and run away… you know though: God even uses that. I had a birthday phone call last week from a friend whose life was always in chaos because she just had one thing she could NOT get at work. After years she got it… and that gave her more responsibility, and that put her life in even more chaos. Thing is she was my housemate. We might have hung on a bit longer if she saw this work opportunity coming. But lo, when it got there, it was even worse than before. My departure – my fear of commitment – turned out to be something God used for my good: in this case, my sanity.

I’ve nearly never come clean about all the times I’ve run away. But mostly: it was because I couldn’t trust God to bring good out of where I was or else, I was too chicken to take the actions I knew I needed to take so running away was the only thing left. For example, when I became Orthodox I was living with this guy. I was trying to find a way to be Orthodox and hold on to this guy. I couldn’t… so I left. Moved to Asheville, because I couldn’t make the break up either. So, when I wrote “I was in hell” I was living with this Dude. And no small art of my hell was made up of not being willing to act and to trust God when I acted.

So I ran away.

Which God used: bringing dozens of people into my life, bringing friends I’d never have had otherwise, reconnecting me with my parents (because of proximity), reconnecting me with some sense of adult responsibility: I came away from there with my first driver’s license and my first car. And I got there with my first sense of things I can’t do any more and be Orthodox or Catholic. It took a while to sink in, but the lesson was learned.

I’m not sure why this lesson shows up on the Nativity of the BVM, but maybe because her parents were barren for so long that they are a reminder: even when life isn’t going “right” it is still going God’s way.

My formation director in the Dominican Tertiaries encouraged me by saying that God used all the things I’d been through to bring me to holiness. I’ll chew on that. God uses all things for our Good – which means for our acquisition of virtue, our salvation, our union with him. As St Paul says, later in this chapter.

For I am persuaded, that neither death, nor life, nor angels, nor principalities, nor powers, nor things present, nor things to come, Nor height, nor depth, nor any other creature, shall be able to separate us from the love of God, which is in Christ Jesus our Lord.

Not one thing that can happen to us can part us from God.

But this is where my faith is weakest, and I have more than trouble here: trusting that things are going not “as God planned” but rather “As God is saving me”. 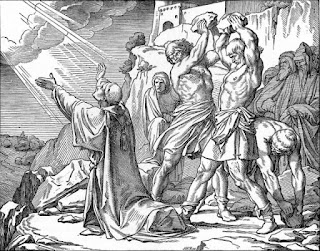 The Readings for St Stephen’s Day:

Cavete autem ab hominibus. Tradent enim vos in conciliis, et in synagogis suis flagellabunt vos:  et ad præsides, et ad reges ducemini propter me in testimonium illis, et gentibus.
Beware of men. For they will deliver you up in councils, and they will scourge you in their synagogues. And you shall be brought before governors, and before kings for my sake, for a testimony to them and to the Gentiles.

This week, to celebrate Christmas, we have the feasts of a whole bunch of martyrs:

There’s a progression here. The Church’s calendar has always been about teaching – which is why the feasts from 26-28 do not change. (The feast on the 29th came later and is of a lower rank but it expands the pattern.)

The faith annoys people in the world and, for a few hundred years, Christians got killed. It was not a solid killing spree though: sometimes Christians were just the freaky folks that normal people had to put up with. Julian the Apostate cemented the pattern that has held forever: Stalin was still doing it last century and Castro was doing it even in this Century. You kill some, oppress the rest – people give up after awhile. Much easier to buy bread when you don’t have to worry about the religion of the baker. In some places the killing gets so great that even the faithless get caught up in the mess. The various wars in various parts of the world that are fought over “religion” end up killing people in the name of religion that might otherwise be faith-neutral. ISIS has slain people who were not Christian who have been named Martyrs by the Copts. Today if you are public about your faith you have to say “yes, but not that kind of Christian” so often. People who pray in public can be mistaken for Muslims by some or for Trumpists by others. How ironic, that? There may be no killing, but there is social ostracization. People of faith can be forced to bake cakes for the Queen of Heaven (see Jeremiah 7:18), but professional musicians and sports teams can break contracts in states with laws they don’t like – and be cheered on.

Yet, I fear the Becket phase is coming.

In the Becket Phase, people who claim to be Christians – but are really only politicians – will kill off the faithful. People who are one sort of Christian will easily hate others and will turn them in. Here, many might expect the liberal all inclusive sort to say “Yes, but not that kind of Christian…” as they point with baseball bats of political correctness at people in Pro-life Marches or those opposed to making up new rules for marriage, sex, or human identity. I don’t find that impossible, but I think in this country, at this time, we’re more likely to see people who support racism in the name of their politicised faith turn against people who support justice in the name of Catholicism, if the former continues to evolve into the law of the land, the latter (including many bishops) will become targets.

In the Stephen Phase, we would have to journey to the Middle East as evangelists to be killed – or, we could sit tight in our protected churches and wait for someone to come find us. Statistically, though, the second case will fit better into the Becket phase described above. We’re more likely to be shot by a conservative in this country than by a Muslim.

So there we are. I don’t have much happiness to share in these feasts of martyrs other than we’re all supposed to be martyrs and it helps if there are those out there who want to help us along the path. 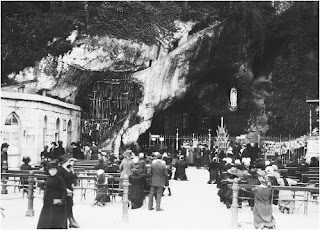 ✙
JMJ
The Readings for the Solemnity of the Immaculate Conception:
Ave gratia plena: Dominus tecum.
Hail, full of grace! The Lord is with you.

Unto whomst (as all the cool kiddies say on Twitter) else has the Lord ever said “Full of Grace”?

No one gets this praise. No one at all, but she who is the Mother of God, conceived this day without sin.

But why? The teaching is that by a singular act of the Divine Mercy, Mary was given this grace before birth: not to know the stain of original sin. The “splendor of an entirely unique holiness” by which Mary is “enriched from the first instant of her conception” comes wholly from Christ: she is “redeemed, in a more exalted fashion, by reason of the merits of her Son”. (Catechism, 492.)

And where else do we hear that sort of language? Around baptism! Around our baptism.

It’s not sensible to deny any of this – although Modernists get away with it by denying original sin outright. This is also not sensible: anyone who has met an Orthodox or Catholic Politician knows original sin is real. If you have the slightest inkling that Jesus is God, what honor would he not bestow on his mother?

The Greek is κεχαριτωμένη kecharitōmenē

This word gets used one other time (in a different form) in the entire New Testament.  It’s in our second reading today, Ephesians 1:6, and it’s not talking about Mary, but about all of us who are Baptised.  And this is why it makes sense to honor Mary today as Full of Grace: the Grace of Baptism bestowed before birth by God’s mercy. It’s scriptural: what God says of us after Baptism, he says of Mary before there ever was a baptism!

In Ephesians, we are celebrated as the ones chosen by God – in the same way as Mary. We are the one made in Christ to be blessed with every spiritual blessing in the heavens. We are given this favor freely: we are made full of grace. To deny this to Mary is to deny this to everyone. (Again the Modernists and Liberals would have no problem with that.)

Today we celebrate in foreshadow what we will hail in reality on Christmas. God become Man to bring Man to God in fullest union. God entering our world to change the very fabric of it to make it a pathway of life instead of death. And even here, at conception, the thing that kills us is destroyed.

This day we affirm the highest honor God bestows on all of us by celebrating the most singular person to receive that honor in the most singular way. What we received in Baptism, by the promise, Mary received at conception by Grace. Let us by her prayers become worthy of this gift that we, too, may intercede with her before the Throne of God for those in our lives.