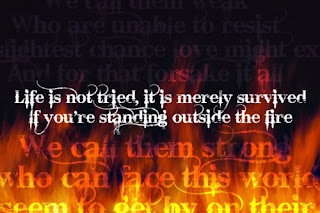 The Readings for Tuesday in the 3rd Week of Lent (B2)

Ut possimus invenire misericordiam tuam, sed in animo contrito, et spiritu humilitatis suscipiamur. Sicut in holocausto arietum, et taurorum, et sicut in millibus agnorum pinguium, sic fiat sacrificium nostrum in conspectu tuo hodie, ut placeat tibi, quoniam non est confusio confidentibus in te. Et nunc sequimur te in toto corde; et timemus te, et quaerimus faciem tuam.
That we may find thy mercy: nevertheless in a contrite heart and humble spirit let us be accepted. As in holocausts of rams, and bullocks, and as in thousands of fat lambs: so let our sacrifice be made in thy sight this day, that it may please thee: for there is no confusion to them that trust in thee. And now we follow thee with all our heart, and we fear thee, and seek thy face.

The Prayer of Azariah was edited out of the Protestant text of the Bible, although it was included in the 1611 text of the Authorised Version, known among US Christians as the “King James Version”. It recounts the prayer of the Three Young Men in the fiery furnace, heated so hot that it killed the Babylonians who were standing around. It contains a number of important concepts for traditional Christian piety, but today’s reading does not get to those. It’s worth a read in its entirety, although you may find the RSV version easier!

Today’s text gets to the heart of Lent, if you ask me. Standing in the middle of the fire Azaria prays not to get out, but that he and his companions will be accepted as a sacrifice.

You’ll remember that Azariah got there by not worshipping an idol. Azariah has been kidnapped and enslaved – albeit treated very well in the King’s own house. He has refused to eat food sacrificed to idols – becoming instead a vegetarian and a teetotaler.  Even though it made things rather difficult, he has rejected all the cultural impositions of his oppressors and, when push has come to shove, is willing to die rather than give in. The epic plot twist is twofold: the King and his higher officials were impressed at the piety of the Hebrews. But that very reaction made others jealous and in their envy, they moved the king (who, fearful of public opinion, was far weaker than the Hebrews) to take action against his slaves.

So, it’s not just an unjust ruler taking it out on an oppressed minority, it’s an egotistical ruler with an easily-bruised self-image being driven by unseen enemies behind the scenes to do things to people who, hitherto, he had accounted friends. The situation doesn’t sound familiar at all.

The path of Christianity in America has been very different: we (Catholic, Protestant, and Sundry) have generally played up to the culture, retreating from tradition in the name of respectability rather than attempting to hold our own against the culture. If you think otherwise, you’re not paying attention. I’m not talking about attempts to change the laws (or not). Take, for example, prayer in schools: it’s one thing to say they don’t belong in public schools, supported by tax dollars. But why are some Catholic schools taking statues out of the hallways to “not be offensive”? No Catholic School I know requires Daily Mass any more… Or issues of sexual morality, again: I’m ok with whatever the state deems moral being taught as such in state schools. But why are religious schools following? It’s all about respectability. The Amish are a noted exception, but most of us think they’re hella cool.

Note please that both Azariah’s approach and the current tack seem to end up in the same place for the world, the flesh, and the devil ever push back against the Truth. One seems to build a stronger resistance, though.

And standing in the middle of the fire, would I have the grace to pray for acceptance as a sacrifice, or would I cave in and be respectable? I think, just now, the latter.

Lent, though, is intended as training for the former.