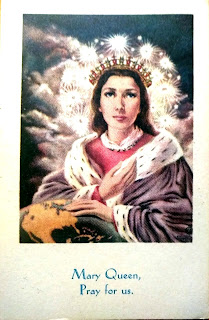 The Readings for the Visitation of the Blessed Virgin Mary

Fecit potentiam in brachio suo:
dispersit superbos mente cordis sui.
Deposuit potentes de sede,
et exaltavit humiles.
Esurientes implevit bonis:
et divites dimisit inanes.
He hath shewed might in his arm:
he hath scattered the proud in the conceit of their heart.
He hath put down the mighty from their seat,
and hath exalted the humble.
He hath filled the hungry with good things;
and the rich he hath sent empty away.

My favourite Marian feast, and also the most revolutionary. This feast gets to me for a number of reasons. This young woman (some estimate 13 or so) has just had some shocking news: she’s going to birth a baby. Then she’s told her aged cousin is also with child and she runs off to take care of the woman, jumping into service instantly. And the two women who are with child in an odd, even embarrassing way take care of each other. When she comes home, now six months pregnant, she has to tell her betrothed what’s going on and he has to learn to accept it (with the help of an angel as well).

When we’re talking about the place of women in the New Testament, if we don’t notice these two we miss the point. Jesus’ mother was a firebrand. With only a couple of exceptions, when we see her in the Gospels she is unmarried. She is daring. She has the gumption to tell her son (whom she knows is divine) what to do. She orders around the help at other folks’ parties, she dashes off (seemingly alone) to take care of her cousin. Like her son she, too, hangs out with a prostitute. She and other women brave the soldiers at the crucifixion – when almost all the menfolk run away.

Mary is… strong. When Greek and Roman legends need women like this, they look to the goddesses, but when the Jewish and Christian scriptures need women like this, we have them, right here, ready to go. Even, for all that went down, Eve fits into this role. Who needs goddesses? We’ve got the Matriarchs; and then there’s Mary (and then there’s Mary). 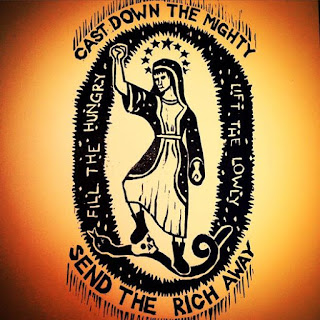 And, since Mary is an prototype of the Church, this is our song, this is our job as well. The fathers of the Church are quite clear: the only reason God gives us wealth is to give it away. The extra money, the extra clothes I have… these are all on loan to me – not from God, but from the poor. My duty is to return these goods into the hands of their rightful owners.

I thought of this yesterday morning as a poor man on the street outside my office was waving a broom. He and I have spoken, in fact when he saw me at 6:45 AM be put his hand over the end of the broom and held it down. But he didn’t speak. I think this was a case of “off one’s meds” but he still knew his friends. Anyway, by 9:30 he was into full-on street-crazy mode. And I really didn’t know what to do. The security guard, standing outside, kept him calm and I never heard the cops come, so I think it was ok in the end. But in the past he’s had grocery store and a coffee shop to go to: they’ve been closed for a week or so, and all the signs have been removed. The parking lot is surrounded with chain link and I think some other thing is about to happen on the corner of 9th and Howard. Sadly that means there’s no port-a-potties or shower-on-wheels there for the homeless any more as well.

So much of this city is “casting the lowly further down and lifting up the rich”.  San Francisco is rather like the nation at large: we have a wealthy nation that can’t share. We can’t share with our own poor, nor with the poor outside our lands. And none of us has enough.

So what’s the Church to do? How can we lead by example? To be certain we don’t always do that. Sometimes we’re happy to talk about the unborn, but the unhoused (or the unnationed) escape our attention.

Let me introduce you to the Gubbio Project: giving the homeless children of God a place to rest, to eat, to shower, and to socialize in unused Church space. And really, who better to dwell in the tabernacle of the Lord than his living icons?