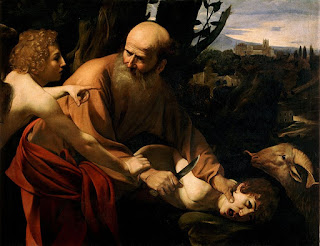 The Readings for the 2nd Sunday of Lent (B2)

Thou hast not spared thy only begotten son for my sake.
There is so much pain in this story. The Lent that I was at the Monastery, I couldn’t even read this outloud at Matins, I was so overcome with emotion. Father Prior excused me saying, “I think we know the story.” What about the small boy, I kept wondering; what was Isaac feeling? Yes, I’m sure Abraham felt something too. But what about the boy?
I attended a Mass of Thanksgiving last year, celebrated by a newly ordained priest. After Mass he gave his mother the cloth that had wrapped his hands after they were anointed in his Rite of Ordination. To his father he gave the stole he wore when he heard his first confession. They were to be buried with these items, he said, to show that they had given up a son to the Church. There was not a dry eye in the place.
In her letters, St Catherine of Siena spends a lot of time counselling parents of kids who have joined the church as clergy or religious that they have not abandoned their parents and run away. Rather they have come to their true Mother, the Church, and their true Father, God. From within the loving embrace of their true Mother and Father, they can, from there, to more good for their natural families than they could ever do otherwise, by simply getting a business and raising more kids. If we love only for natural reasons, (who will take care of me, who will carry on the business) then we are not actually loving, but a special breed of blinded selfishness. It is in loving God that all other loves are practiced. We do for the poor, not because doing for the poor is, per se, good but because God loves everyone. So we should love everyone. The deep, intimate bond is between the Lover (God) and the beloved, you. All other loving actions flow from that, or so St Catherine would have us see.
Jesus says, elsewhere, if you do not love him more than your family, you are not worthy of the Kingdom.
All rightly-ordered love is a reflection of our love for God And so, in a real way, we are all called to sacrifice our families on the altar. Daily. And, really, our selves as well: which of us has not lost something we thought precious in our service?
But what about the boy?
I heard a homily once where the preacher said this text “proved” the Israelites once practiced human sacrifice like so much of the Ancient world. And you can imagine that if you want as Isaac says, “were is the sacrifice?” and Abraham says, “God will provide” and snickers behind his hand…
Or you can imagine Abraham being angry with YHVH, being just like all the other local deities, finally revealing himself as just another baby murderer.
Or then, there’s the possibility that the story is true as we have it. That God tested, and Abraham trusted. Israel triumphed.
The Church Fathers see here a foreshadow of God not sparing even his own son in his love for us.
But what about the boy? What was he thinking, bound up, laying on the altar?
I have no answer. This story makes me cry. This is one of those places where God heals and does not reveal: for clearly Isaac grew up and trusted God rather a lot – a LOT – in the rest of his story, even though it was hard work. That which does not kill us, makes us stronger, I guess? Perhaps that is for us the best lesson here. Trusting this God is hella hard.
God provides.
But there’s some deep, hard questions here. Our faith is not a broad, smooth road.