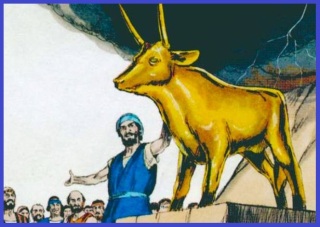 The Readings for the Memorial of St Martha
Monday in the 17th week, Tempus per Annum (C1):

Cui ille respondit : Ne indignetur dominus meus : tu enim nosti populum istum, quod pronus sit ad malum.
And he answered him: Let not my lord be offended: for thou knowest this people, that they are prone to evil.

The people of Israel have lived in slavery for several generations. They know only idolatry. They only know that some God many have never heard of is rescued them… and they are really quite afraid of this one. The other gods never did anything scary – at least not inside human memory. They know what the worship of fakes looks like. This is why God has given them leaders: to raise them up in the way of their ancestors, to worship the True God of all that is, even of the animal forms of gold and rocks the Egyptians worshipped.

Then he passes the blame – not to the people… but to the fire and gold: “egressusque est hic vitulus”. This calf came out…

Who did this, asks the parent. “Notme” reply all the children in the room standing around the pile of garbage that was formerly something important.

Although the people have sinned and will be punished, Moses puts the blame directly on who is at fault: Moses asks Aaron, What did this people do to you that you would lead them into this sin?

I imagine this question will be asked a lot on Judgement Day of leaders who failed to lead, of teachers who failed to teach, of those who were called to speak and fell prey to that liberal canard falsely attributed to St Francis, “use words when necessary”. We “led with beauty” and were “winsome” but we never got around to meat. We dodged questions for fear of causing the weak to stumble, but we never got around to correcting the fallen, to answering them once they were strong.

This is a failure of courage. Until recently (this weekend, really) I thought the vice of cowardice was a failure resulting from some inner weakness. It seems to me, on deeper meditation, to be a species of the sin of pride: I would not anyone see me fail, so I shall simply juggle for a while and slowly back away. If I  sit here quietly no one will see me and, at the right moment, I can vanish. Certainly, introversion can seem like the vice of cowardice, but there is a difference in the heart on this, so don’t misread my statement. And the grace we are given to manifest a charism that we have will overcome – and use – our own weaknesses when they are needed.

Cowardice is a failure to use our charism: to rely on our own self to do something that we should let God do through us. To fail to keep someone in your charge away from a grave fall is for the shepherd to run away from his sheep when the wolf shows up.

A teacher was once asked if someone had to accept all the church’s doctrine to be Catholic. Rather than answer the question at all 45 mins were involved defining the difference between “doctrine”, “dogma”, and “tradition” so that, in the end, there was no time to spend answering the question in a way that would offend anyone.

What did the people ever do to you to deserve such a teacher?

I imagine all of us who have been called to be leaders will need to rely on Aaron’s excuse: “You know, these people are so evil, that I had to let them get away with their pet sins or else they would have gone away. It’s better to have them sin and stay than leave and sin anyway, right?”

“The reality is that we are in danger. This is one of the reasons I have for staying in the face of physical harm. The shepherd cannot run away at the first sign of danger. Pray for us.” Thus said Blessed Stanley Rother 18 months before he was slain by a rightwing hit squad in Guatemala. It is true of us here too, but in other ways. We are in danger  – if we’re not, we’re doing it wrong. What have our flocks, our friends, our councils, our families ever done to us to deserve such leaders?

Who will be the Moses that will intercede for us on that day?