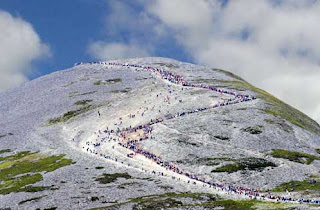 The Readings for Monday in the 3rd Week f Lent (B2)

Et multi leprosi erant in Israel sub Elisaeo propheta : et nemo eorum mundatus est nisi Naaman Syrus.
And there were many lepers in Israel in the time of Eliseus the prophet: and none of them was cleansed but Naaman the Syrian.

Look, says, Jesus: God can do anything he wants. Don’t take comfort in your status as “chosen” unless you are actually doing the works of the chosen.

He references two events in the life of Israel. Both involve blessings given to Gentiles rather than Jews. In the case of the Widow of Sidon, she is faithful to God’s commands when a princess of her own people (Jezebel) is destroying the faith in Israel. Jezebel is chasing Elijah around – and he goes (by the direction of God) to hide with her own people! God showed Elijah that even there among Gentiles there is faithfulness.

But Jesus question about Naaman is even worse: for in that situation nothing was wrong in Israel. And Naaman came to get healed and was healed. But then the Prophet’s own servant took advantage of the situation and got a reward from Naaman. The prophet cursed the servant – and his whole family – with the leprosy that had been on the Gentile.

So both stories reference not just blessings given to faithful Gentiles, but also curses given to unfaithful Israelites. These should not be, in any way, comforting to us, even though the Church is almost all Gentiles today.

The other day on a certain part of the internet that has an “e” in the name, someone decided to launch an attack on a bunch of Catholic converts because they were doing it wrong. Look, they said, come to a Catholic country like Ireland and see how many real Catholics are concerned with fasting or “giving up something for Lent”. Now, anyone who visits Ireland will know there are lots of faithful Catholics in that country who freely engage in penances that make mine look like I gave up penance for Lent. (Crawling on one’s knees up Croagh Patrick, anyone? In the snow?) And anyone who knows American Catholics will know that there are many many faithful – convert or cradle notwithstanding. Still, the reality is that a large number of folks – not only in Ireland, but also in the US and other places – and, again, convert or cradle notwithstanding – treat the rules of the Church as if they were entirely optional: be they rules of fasting, sex, holy day masses, whatever. I can’t judge the hearts of those who do so because my sins are greater. It is a real thing.

It is not just a Catholic problem: the same is true among the Orthodox. It’s the outsiders coming in, the converts, the people who don’t live in Orthodox countries, that want to follow all the rules. The so-called “cradle” folks often don’t care. In many cases this also split further along sex lines: men are following fewer rules than women. The whole family may go to Church on Sunday, but even in Panama, the menfolk (who were not converts) were outside smoking cigarettes and talking to each other in the language of the Old Country. The women and children were inside praying with the converts. If you are scandalized by Catholic Politicians voting contrary to Church teachings, the Orthodox have them as well. In like manner, after decades of blasé, suburban values ruining mainline Protestant churches in America, it was missionaries from Africa, Asia, and the South Pacific that began bringing historic Christianity back to American churches, and encouraging the faithful remnants in these denominations.

One of the converts on line replied, “Let us Europeans show you silly Americans how to properly empty your churches…”

Elsewhere Jesus says, “Let your good deeds shine that others may see them and praise your Father in heaven.” Do we have have good deeds to show in any of the three categories of Lent (Fasting, Prayer, and Almsgiving)? Is it possible that our blessings will be taken away?