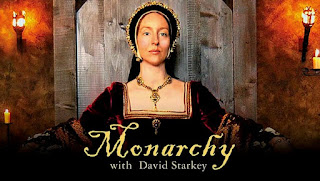 The Readings for Monday, 3rd Week of Ordinary Time (B2):

The BBC’s Monarchy is absolutely one of my favourite documentary series. (It’s tied for first, really, with The Power of Nightmares. While it documents the history of the Celtic, then Saxon, Norman, and English powers that have held the Matter of Britain under their royal sway, the series also discusses the attitudes and cultures that gave rise to what we now know as a “constitutional Monarchy”. The British Monarch is rather more than a Figurehead, but rather less than Imperial; certainly not a fairytale figure, but also not just a non-elected president, or a Dictator for Life. I think the host of the series (Dr David Starkey) also makes a wonderful if, (only) perhaps unintentional point: that this marriage of Crown and Control, of People and Prince is, perhaps the best governmental option we have.

Our first reading today give us a glimpse of a constitutional monarchy set up in early Zion. The Elders of Israel had had enough of Saul and so, not wanting another excitement, they came to David in Hebron and made a covenant with him, a “B’reet” in the Torah or “Bris” in more colloquial usage, which is also the same word used for the Covenant of Circumcision. That will give you an idea of how important this was. The Elders of Israel, before the Lord, made a compact with David like unto the very Covenant between God and Israel. That’s how important the Davidic Kingship is – and so, by extension, the Messianic Kingdom.

After the covenant… but wait. Not yet.

This is a constitutional Monarchy. That’s the point that is important: it’s a deal of free will, entered into by choice on the part of all parties. It has obligations and rules important to both sides to follow, a contract that says “I will do this and I can be your king. You will do this and you will be my people.” Should either side break the covenant, it’s a personal affront to the other side, not just a “regime change” but more like a divorce. It’s the ending of a relationship.

The Davidic Crown is a prototype for the best of government throughout history. Not the mass hysteria we call “democracy” but rather covenants, between adults in community, to rule and be ruled, to govern and be governed, in the sight of God. Even God’s kingdom comes with choice attached, the Freedom to be in it, or not, the uncoerced decision to enter into the covenant or not.

This is why John Adams said our constitution would not work for an irreligious people, and why Alexis de Tocqueville recognized that religion in America was like a bit and bridle on the otherwise ungovernable horses of human passion and mob rule. The American system’s genius was a constitutional monarchy in a very real sense: the governed and the governors all bowed to the monarchy of the Constitutional document. That is no longer where we are. Neither religion nor respect for the Constitution holds us in check as a people. We are all rather short sighted and nothing allows us the patience of 30 generations to work something out.

Jesus says, “Si regnum in se dividatur, non potest regnum illud stare. Et si domus super semetipsam dispertiatur, non potest domus illa stare. If a kingdom be divided against itself, that kingdom cannot stand. And if a house be divided against itself, that house cannot stand.” That’s where we are living right now. Neither president nor people imagine themselves in league. Even those who think the President is somehow for them find themselves divided, rather than united by that support. Anywhere there is division, it is not God’s spirit at work, but rather the real presence of the evil one.

So we are limited in our actions’ power by our divisions and our divisions only worsen as we wait inactive. That this reading comes up as America’s Gov’t is in Shutdown mode is purely coincidental. But were there someone in power over the President and Congress, she might dissolve the gov’t and say “try again…”

We have fallen into the world described by The Power of Nightmares. We no longer are guided by our best dreams and visions, but rather by our fears. And the one who can project the biggest fears onto the most folks rules. Augustine realized that we have a whole other obligation: building up the place where we are and yet not being attached to it. To work to heal and yet also, to let it pass as having another homeland.

So then, what? As Christians who must refuse to be governed by fear (for perfect love casts out all fear) what is to be our watchword today?

Crown Him with many crowns, the Lamb upon His throne.
Hark! How the heavenly anthem drowns all music but its own.
Awake, my soul, and sing of Him who died for thee,
And hail Him as thy matchless King through all eternity.

Crown Him the virgin’s Son, the God incarnate born,
Whose arm those crimson trophies won which now His brow adorn;
Fruit of the mystic rose, as of that rose the stem;
The root whence mercy ever flows, the Babe of Bethlehem.

Crown Him the Son of God, before the worlds began,
And ye who tread where He hath trod, crown Him the Son of Man;
Who every grief hath known that wrings the human breast,
And takes and bears them for His own, that all in Him may rest.

Crown Him the Lord of life, who triumphed over the grave,
And rose victorious in the strife for those He came to save.
His glories now we sing, who died, and rose on high,
Who died eternal life to bring, and lives that death may die.

Crown Him the Lord of peace, whose power a scepter sways
From pole to pole, that wars may cease, and all be prayer and praise.
His reign shall know no end, and round His piercèd feet
Fair flowers of paradise extend their fragrance ever sweet.

Crown Him the Lord of love, behold His hands and side,
Those wounds, yet visible above, in beauty glorified.
No angel in the sky can fully bear that sight,
But downward bends his burning eye at mysteries so bright.

Crown Him the Lord of lords, who over all doth reign,
Who once on earth, the incarnate Word, for ransomed sinners slain,
Now lives in realms of light, where saints with angels sing
Their songs before Him day and night, their God, Redeemer, King.

Crown Him the Lord of years, the Potentate of time,
Creator of the rolling spheres, ineffably sublime.
All hail, Redeemer, hail! For Thou has died for me;

Thy praise and glory shall not fail throughout eternity.

We have a king to follow even if this world is falling apart. We have good to build up, and bad to let pass away. We have, to use yesterday’s readings, all the world to use but not according to its use. We cannot be partisan, for no party is wholly with us, but we can be biased in favor our our king, and aware of how each action moves us either closer to him or further away. We can make all steps for the former and avoid the latter at all cost. Following the Truth, himself, will make us very disloyal in the secular eyes that watch us, and dangerously subversive to both right and left, liberal and conservative, “red” and “blue”.

But he will make us free.