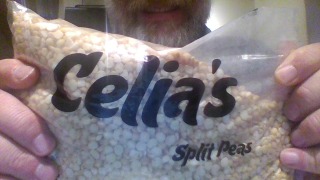 BBC Radio 4’s The Kitchen Cabinet is one of my most favourite things, right after whiskers on kittens and Atmospheric River Events on roses. They travel the UK looking for regional specialties and sharing cooking advice. Most of the members of the panel are from some part of the UK (I think), but they even have a token American who is called on to explain things like corn dogs. I love them not just because they read one of my recipes on the air (and raved…) but also because I keep learning stuff from them. Some cooking shows only make me hungry, this one makes me laugh and also put on that “thinking emoji” face that spins.

The recipe they shared from me involved split peas, or, as they seem to prefer it spelled, pease. You’ve heard the nursery rhyme, “peas porridge hot”. Or, to use the correct spelling,

The Wiki notes that “pease” was the original mass noun like “sheep”. Pea is a neologism and “peas” is even newer.

To make pease porridge, one uses yellow split pease. The nutrition information for this is really quite surprising. In 100 grams (uncooked) we find:

Fiber and protein far out-weigh the sugars. That same cup of uncooked veggies has a tiny bit of fat and a whopping 341 calories. (100 grams of brussel sprouts has 46 calories. 100g of russet potatoes has 79 calories.) Pease are high energy, high protein treats! No wonder they were a huge part of the diet not only in the Mediaeval period but also in the many parts of the world right up until the modern era. They don’t have a lot of different vitamins, but they are very high in magnesium and iron (nearly 50% RDA of each). This is a good food value for folks.

It’s simple to make: soak 200g yellow split pease in water overnight. (It’s the 21st century, folks. Buy a scale. If you prefer traditional imperial weight measurements: .03 stone.) Drain but don’t rinse. My rice cooker is perfect for this: just add water to cover and then run in through a cycle, stir, add water to cover again, and one more cycle. Done. Texture is an issue for some folks: if you like it bit on the chewy side and you can add about a quarter cup of raw pease before the second cycle. Other’s like it very smooth and will run an immersion blender through it. Simple, right? As it cools it turns into a think goop rather like very stiff mashed potatoes. Add butter if you want. The trick is how you decide to flavor it.

Traditionally, you would dice a carrot and a small onion, add salt and paper and a bay leaf or two. There is a California Bay in the back yard and I can vouch for the goodness of this recipe. You upscale with bacon or ham. Serve it on bread, toast, biscuits, etc. Some Bisto gravy makes this completely amazing. It seems it’s also traditional to use this as a sandwich spread of some sort, but I can’t figure that out.

But flavoring, or flavouring…

The first time there was no ham so broth was made with red miso paste. It was amazing.
The second time there was no miso, so only bacon went in. That was astounding.
The third time I used a packet of onion soup mix in the water. Sooo good! Add garlic!

And this time, going a little crazy, a packet of mild chili mix was whisked into the second addition of water.
Also: evidently the Greek food “Fava” is sometimes made with split peas… but I don’t know if that’s really the case. I can see this being used  for hummus, too.
When it gets cold it’s quite like mashed taters. I’ve fried it up in pancakes at that point. It’s really good on toast and my best way of eating it has involved a garlic naan (from TJ’s) with a mound of pease. Put a deep divet in the pease and break an egg into it. Put it in the toaster oven until you’re ready to eat the egg: sunny side, over easy, over medium, etc… it just takes getting used to your oven.
Some like it hot.
Some like it cold.
I like it in the pot
Nine days old.
Benedicto benedicatur!

For Orthodox of both eastern and western rites, the period leading up to Christmas is a time of abstaining from animal products.  Fish may be ok, shellfish too, but meat, dairy and eggs are right out.  So we find other things to do.  These two recipes have become mainstays for me this season, already: and I’m surprised I never thought of them before.  Both allow for a lot of variation and so I’ve added notes to each.  Salad goes nicely with them.

Ramen Miso
We will start with the soup.  You see the ramen packs above, that’s what we want – but throw out the flavour packets. It’s all salt and some other crap.  It’s totally pointless: what we want is the noodles.

Bring two or three cups of water to a boil.  To this add some miso paste: follow the instructions on the package, mine says 1 tbl per cup of water.  Then add one extra serving – so for two cups of water, I add 3 tbls of miso.  YMMV.  Then add the noodles and simmer until tender. Salt and pepper for taste.

That’s it.  Miso soup with ramen.

It’s also very boring.  So:  try adding diced up tofu, seitan, or tempe.  This can be flavoured anyway you want.  Try adding veggies!  I’ve found that a bag of frozen mixed veggies works just fine here. As does leftover Chinese food diced up. Stir fry something or add it raw and simmer until done. Greens are good, bok choi rocks. Last night I had it with box choi and mushooms.  This works really well for two servings: one for supper and one to take to the office.

Frybread
This one is a little more complex but very tasty.

Combine 2/3 Cup self-rising flour with 1/2 tbl of NRG Egg Replacer powder. Whisk the dry ingredients together and stir in about 2/3 cup of water.  You want a very stiff dough and, depending on the flour and the weather, you may not need all of it, but you don’t want it runny: a well mixed cookie dough is about right.

Heat up a couple of tbls of olive oil or canola oil in a deep frying pan for which you have a lid.  You’re going to want about 3 inches above the bread – so pick wisely and do so before you have hot oil!

Place the dough in the oil and spread it out a little. It should start frying instantly. Add the cover and then get a couple of tbls of water.  Carefully spritz the water around the bread and cover instantly. DANGER Water and Hot Oil is a volatile mix.  Be very careful.  What you are doing is setting of a mixed cooking method of steam and fry.

In about three or four minutes the bread will rise up be easy to flip over with a turner.  Cover again and cook until done (another 3 or 4 mins).

Slice, spread some vegan butter spread on top and nom away.

Variations that I’ve tried so far this year: instead of water I added almond-based “winter nog” and some sugar got a wonderful fried dessert product.  I’ve mixed the bread with 1/3 cup self-rising flour and 1/3 cup self-rising cornmeal and had fried corn bread!  Instead of water I’ve added veggie broth – very savoury bread!  I’ve also made it with mushroom broth. One failure though: I tried it with cranberry sauce. Just don’t do it.